In this video, I make an incredibly tasty paleo peach cobbler. It’s a delicious fruity dessert that will please anyone on a Paleo diet.
Recipe: https://paleocrashcourse.com/paleo-peach-cobbler/

For the best result, I highly recommend that you use fresh peaches. If you’re out of options, then tinned peaches will work fine too. Just make sure if you’re using tinned that you get peaches with no added sugar.

You can eat this peach cobbler on its own, but it also goes great with delicious coconut custard. Just try to keep any extras paleo friendly if you’re trying to be strict.

If you need a list of ingredients for this tasty paleo dessert, then you can find one right below. Altering any of the topping ingredients may lead to a dessert that isn’t very tasty.

This dessert is entirely gluten-free, so it’s perfect if you’re suffering from gluten intolerance.

Personally, I will keep any leftovers as they reheat great the next day. You can also eat it cold and still be happy with the taste and texture.

Feel free to be creative with the fruit in this cobbler. For example, something like blueberries or raspberries will be a great addition.

I hope that you enjoy this Paleo peach cobbler and that this video was easy to follow. If you have some feedback, tips or anything else, then please feel free to leave a comment below or over at paleocrashcourse.com 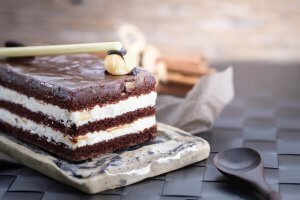 Scroll through Pinterest, or any of the many Keto groups on Facebook, and you will see amazing-looking desserts that are reported to taste just like they are made with sugar.  They even have 5 carbs or less per serving.  Being able to have something sweet when you are on a restricted diet can help you push past cravings, so the option is worth exploring.

Because it’s so important to be strict with your carb count to stay in ketosis when you are on the ketogenic diet, ‘moderation’ with natural sweeteners like honey, maple syrup, and dehydrated cane juice are not valid options.

But the keto community has come up with solutions and you’ve probably seen them.

Once you click on a keto dessert recipe, you see that the ingredients often call for Swerve, or erythritol among other low-carb ingredients such as coconut or almond flour. What is this stuff, and is it safe? Some of the packaging claims ‘all natural’ but we know that is a term that can be used very loosely.

Today we’re going to look more into Erythritol and how it is made, and what studies have been done on it.

What sugar substitutes are used in recipes and why?

In most cases, baked good recipes for keto are using a sugar substitute.  This substitute is most often Erythritol. Erythritol is the most sugar-like replacement sweetener out there and is popular among low-carb bakers. Erythritol is used in  Swerve sugar substitute, Halo Top ice cream, Lily’s Fair Trade Chocolate, and more.  If you’ve tried something sweet that is low carb, it’s likely that you have had Erythritol.

Erythritol isn’t the only low-carb sweetener, there are many others such as aspartame/NutraSweet as we all know from diet soda, chicory root fiber (which I have not tried), xylitol, which I need to do more research on but is said to preform poorly in baked goods, monk fruit (which is often ‘bulked up’ with erythritol when sold as a sugar substitute), and stevia (also often combined with Erythritol).

Erythritol is a sugar alcohol that looks and behaves like sugar.  It can dissolve, caramelize, and provide bulk in baked goods.   It was approved by the FDA in 2001 as a ‘non nutritive sweetener’.

Naturally, it is found in very very small amounts in some fruits (source).

Erythritol is made in a similar fashion to corn syrup, as we talked about with our Candy Making Without Corn Syrup (the candy linked is not keto, sorry) article.

High-starch corn is broken down with heat an enzymes, and the glucose is removed.  From there, erythritol is fermented with yeast and and a fungus to produce erythritol.  This is all done in an industrial setting, and though the packaging looks natural, it is a highly processed food.

Side effects: Erythritol is toxic to fruit flies and fire ants (source) and generally considered to be a human-safe insecticide. Erythritol is also toxic to corn and tomato seedlings. (source) Erythritol, when 50 g were consumed (about 12 teaspoons) mild digestive symptoms were shown. (source) In children, changes in stool consistency (loose stools) were associated with erythritol drinks. (source) Subjectively (there isn’t a study, but are many reports from those who have tried it), erythritol is said to increase sugar cravings in many people. Subjectively (again, no study, but personal reports) erythritol can contribute to water retention, or ‘stalls’ in weight loss. Conclusion:

For my own use, I believe that erythritol is okay to use if desired, but not ‘good’. I also found that when I tried eating it, my stomach was upset, despite many studies claiming that it does not upset people’s stomachs. I also noticed an increase in sugar cravings over the next few days, which is abnormal for me when I’m on keto.

In studies over 1-2 generations in animals, as comparing them to studies in humans, erythritol was considered to be absorbed and not metabolized, and did not show long-term effects.  (source)  Studies included up to 20% erythritol, which is much more than the average person would consume.

Despite these studies showing that it is ‘safe’, this food is clearly made in a lab, and cannot be made directly from the farm in a home kitchen. For this reason, I choose to avoid feeding it to my children, as I’m concerned about long-term implications that have not been studied yet.

To naturally sweeten without carbs, I like using stevia for an occasional treat. As always, our focus for our calories should be on protein and produce, but a sweet treat occasionally can satisfy a craving or need to celebrate.

The following recipes use stevia as carb-free sweetener alternative.

The post Erythritol – What Is This Keto Sugar Substitute and Where Is It Found? appeared first on Health, Home, & Happiness.

In this video, I go through the steps to making a deliciously creamy paleo tapioca pudding. It’s the perfect dessert where the leftovers also make for an easy breakfast.
Recipe: https://paleocrashcourse.com/paleo-tapioca-pudding/

This dessert is so good you can eat it just by itself but if you’re looking for something extra then some fruit really goes well with it. Fresh peaches, mango, banana or apples all work great with this pudding.

The ingredients for this recipe can be found right below. Perfect if you need to get some shopping done and need a list so you can make this delicious dish.

One of the hardest parts of this recipe is not scrambling the eggs. Just take it nice and slow when you’re mixing the yolks with the hot pudding mix. This will help prevent you from scrambling the mix.

As I mention above you can have this dessert either hot or cold. Personally, I prefer it either way but it’s great cold on a hot summers day. I wouldn’t try to reheat this dish once it has cooled down. It is unlikely it will reheat nicely so it's best to cook this fresh.

The honey is important for getting that sweetness but can be left out if you’re trying to keep sugar out of your diet. If you’re thinking of increasing it then be sure to remember not to go overboard.

Extra flavorings can be added to this dish such as some ground cinnamon, nutmeg or other spices. Some spices work better with certain types of fruits so be sure to keep this in mind if you’re changing the recipe.

I really hope that you will be able to cook up a delicious paleo tapioca pudding by following this video. You’re able to leave some feedback right below or over at paleocrashcourse.com